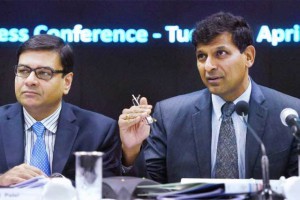 MUMBAI: The Reserve Bank of India cut its main lending rate on Tuesday in a widely expected move to help accelerate growth after inflation stayed under control and the government stuck to its fiscal deficit roadmap.

The central bank lowered the repo rate to 6.5 per cent from 6.75 per cent and said the monetary policy stance will remain accommodative. This is the first reduction in six months and brings the repo rate—at which the RBI lends to banks—to its lowest level in five years.
RBI governor Raghuram Rajan had trimmed the repo rate by 125 basis points last year before keeping rates unchanged twice, in September last year and February this year, as he waited for positive signals on inflation and the government’s commitment toward fiscal consolidation.
Reserve Bank of India today cut key interest rates by 25 basis points in its first bi-monthly monetary policy review for the 2016-17 fiscal. With this, Home, auto and other loans are set to become cheaper. However, RBI has kept Cash Reserve Ratio unchanged at 4 per cent.
The RBI also introduced number of measures to smoothen liquidity supply so that banks can lend to the productive sectors.
Accordingly, the repo rate, at which RBI lends to the financial system, has come down to 6.5 per cent. The reverse repo rate, at which banks can keep excess funds with the RBI, was hiked to 6 per cent. The policy said the average overnight borrowings by banks have increased to Rs 1,935 billion in March from Rs 1,345 billion in January.
Stating the inflation objectives to be closer to reality and price-rise will hover around the 5 per cent mark during current fiscal, Rajan reaffirmed that the monetary policy will continue to remain accommodative to address the growth concerns.
RBI also retained its GDP growth forecast at 7.6 per cent, on the assumption of a normal monsoon and a boost to consumption through the implementation of the Seventh Pay Commission recommendations. But it also expects that the implementation to hurt inflation by 1 to 1.5 per cent over a two year period.
Rajan welcomed the government move to amend the RBI Act to create a monetary policy committee, saying it will further strengthen the policy s credibility.He also welcomed the government’s adherence to the path of fiscal consolidation, calling it as a commendable commitment this will support the disinflation process going forward.