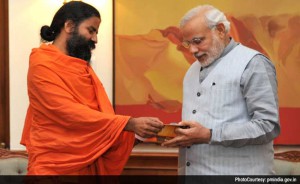 NEW DELHI : Controversial yoga guru Baba Ramdev has been given Z-category security which entitles him to cover by 22 armed guards and an escort car. The Home Ministry has confirmed that the yoga icon will now be protected by para-military commandos from the Central Reserve Police Force.
Ahead of the national election, Baba Ramdev had campaigned extensively for Prime Minister Narendra Modi. The yoga teacher, whose public classes and televised lectures draw massive audiences, has said he will urge the government to focus on bringing back money hidden by Indians in foreign bank accounts. Earlier this month, he visited the PM, whose office tweeted pictures of their meeting.
Sources in the government say that Baba Ramdev, whose main ashrams are located in the hill state of Uttarkhand, is seen as vulnerable to threats from fundamentalist organizations because of the huge crowds he gathers and his stand on political and social issues.
In August 2012, the 48-year-old, who wears his black hair tied in a loose bun, was arrested by the police in Delhi while protesting against corruption and the then government headed by Dr Manmohan Singh.
In 2011, Baba Ramdev held a two-day hunger strike and massive sit-in at a public park in Delhi; thousands of supporters packed the space. The protest was broken up in a surprise midnight raid, which came after negotiations with Dr Singh’s government failed to persuade him to end his fast. As the police forced the demonstrators to disperse, using lathis or batons, Baba Ramdev escaped the venue and was later found near the railway station, disguised as a woman.
The Supreme Court held the police and Baba Ramdev culpable for risking the safety of ordinary citizens.In 2012, the Union government launched an array of inquiries to determine whether the yoga guru and  his trusts have evaded taxes and violated foreign exchange laws.