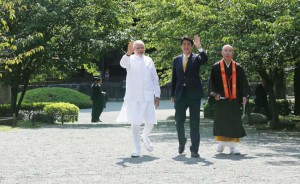 KYOTO:  Prime Minister Narendra Modi began the second day of his four-day trip to Japan today with a visit to the famous Toji Temple in the historic city of Kyoto. As he went around the complex of the ancient Buddhist temple, his Japanese counterpart and “good friend” Shinzo Abe accompanied him. The visit to Kyoto holds significance to PM Modi’s vision for Varanasi, the Uttar Pradesh town that voted him to Parliament. Kyoto is a world class heritage city of the kind PM Modi reportedly wants to replicate in Varanasi.
After the Toji Temple, the PM, dressed in a white kurta pyjama and jacket, visited the 1397-built Kinkaku-ji (or Golden Pavilion) temple and later met the Governor and the Mayor of the city. During this meeting, he is believed to have been briefed about how the ancient tradition of Japan’s cultural capital has been preserved while building it into a modern city.
“Rejuvenation of urban areas on agenda.
Mayor Kadokawa tells @PMOIndia abt green, smart & modern yet historic Kyoto,” tweeted External Affairs Ministry spokesperson Syed Akbaruddin about the meeting. For PM Modi, the Kyoto model could be essential in the process of rejuvenating Indian cities and developing 100 “smart cities”, a promise repeatedly made by his government.
Yesterday, hours after PM Modi arrived in Kyoto, India and Japan signed the Kyoto-Varanasi partnership agreement to strengthen exchanges and cooperation in the fields of culture, arts, academics, heritage conservation and city modernisation.
PM Modi also attended a lunch hosted by the Kyoto Buddhist Association and then visited the Kyoto University. At the university, he discussed sickle cell anaemia treatment with Nobel Prize winner S Yamanaka. PM Modi left for Tokyo later in the day for formal bilateral talks on Monday. The talks are expected to boost trade between Asia’s second and third largest economies.