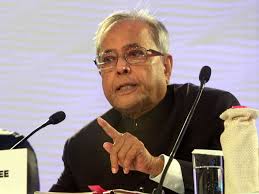 NEW DELHI : President Pranab Mukherjee reminded senior Ministers of the Narendra Modi government that the validity of an ordinance was for just six weeks after Parliament reassembled.
Mr. Mukherjee’s comments to the Ministers when they called on him to explain the urgency for promulgating three ordinances imply that the government will have to get these turned into Acts of Parliament. In order to do this, the government must get the contentious legislation passed either through the Rajya Sabha, where it doesn’t have the majority, or call a joint sitting of the two Houses.
The President told Ministers Arun Jaitley, D.V. Sadananda Gowda and Nitin Gadkari at a recent meeting that it was up to the government to ensure that the validity of the legislation extended beyond the mandated six weeks after Parliament resumed.
Under Article 123 of the Constitution, the President has to satisfy himself that “circumstances exist” that require him to “take immediate action” when both Houses of Parliament are not in session. Also, an ordinance has the “same force and effect” as an Act of Parliament.
“They [the government] could call a joint session of Parliament, where they have a majority. But it would be better if the consensus route was adopted,” the former Attorney-General, Soli Sorabjee, told this newspaper.
In the absence of Rural Development Minister Birender Singh, the President is reported to have sought detailed clarifications from Finance Minister Arun Jaitley on the urgency of on the ordinance amending the Land Acquisition Act, 2013. While seeking reasons to justify the urgency of issuing this and two other ordinances amending the Motor Vehicles Act and the Citizenship Act, Mr. Mukherjee is said to have pointed out that the impact of the ordinances would be permanent.