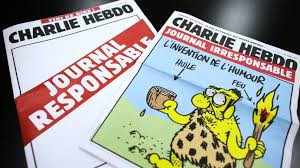 PARIS: Circulation of the “survivors`” issue of Charlie Hebdo, published after a deadly attack on the French satirical weekly`s Paris office, is set to top seven million, the distributor said Friday.
A total of 6.3 million copies were for France alone, amid an outpouring of grief and anger over the attack by two Islamist gunmen this month which left 12 people dead, including some of Charlie Hebdo`s top cartoonists. Five more people were killed in related attacks by a separate gunman.Another 700,000 copies have been sent to overseas markets, the distributor Messageries lyonnaises de presse (MLP) said.
The edition dubbed the “survivors` issue” was published on January 14, a week after the attack. Before then an average circulation for the controversial weekly, which lampoons everyone from the president to the pope, was 60,000.
The new edition featured a cartoon of Islam`s Prophet Mohammed on its front cover, sparking protests across the Muslim world, which had already been angered by past Charlie Hebdo depictions of the prophet.
Tens of thousands of people across Afghanistan, Pakistan and Muslim-majority Indian Kashmir took to the streets on Friday for southern Asia`s biggest protests yet against the cartoon portrayal of the prophet.
Printing of the magazine continues, with MLP still delivering copies to newstands.”Everything that could be distributed has been sold,” MLP said.The seven millionth copy will be delivered by Saturday evening, the distributor said.
The final circulation tally won`t be known for several more weeks.Outside of France the biggest demand has come from neighbouring Belgium.