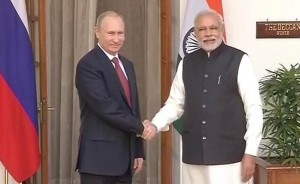 NEW DELH: Prime Minister Narendra Modi is meeting Russian President Vladimir Putin today after the latter arrived in Delhi for a 22-hour visit seen as an attempt to revive a historic friendship that has faded over the years, seeking to improve cooperation in energy, defence and nuclear power.
Prime Minister Narendra Modi tweeted in Russian, “Delighted to welcome President Putin to India. Looking forward to a productive visit that will take India, Russia ties to newer heights.” He also said, “Times have changed, our friendship has not. Now we want to take this relation to the next level and this visit is a step in that direction.”
This is Mr Putin’s first summit with Prime Minister Narendra Modi at a time when Russia is at odds with the West over Ukraine, and its economy is stalling as oil prices tumble to their lowest point in five years. The two leaders had met on the sidelines of the BRICS summit in Brazil in July and during the G-20 summit in Australia last month.
They will hold a one-on-one meeting followed by intergovernmental talks and will also preside over the signing of a broad “vision” document laying out a roadmap for cooperation over an extended period, officials on both sides said.
Ahead of his visit, when asked about the perception that Russia-India ties have lost some warmth, Mr Putin described India as a “reliable and time-tested partner” and termed ties with New Delhi as a “privileged strategic partnership.” The Russian president is expected to seek deeper economic engagement with India to try to minimize the impact of sanctions on his country by the US and its Western allies over the Ukraine issue.
A little over a month after Mr Putin’s visit, in late January, PM Modi will host US President Barack Obama as India’s guest at the Republic Day celebration.
“It is good for a rich fiancee to have a beautiful bridegroom,” Russia’s ambassador to New Delhi, Alexander Kadakin, said before Mr Putin’s visit, adding, “But they should not promise you a marriage and then betray you.”
Yet Moscow’s eye has wandered too since its Soviet-era romance with New Delhi. Bilateral trade, at $10 billion, is now one-ninth of that between Russia and China – the focus of Putin’s pivot away from an increasingly critical Europe.
“Russia is a tried and trusted friend – a country that has helped us in times of trouble,” an Indian official told Reuters. “But that friendship hasn’t delivered in terms of its economic potential.”
Strategic deals will cover oil exploration and supply, infrastructure and an increase in direct diamond sales to India by Russian state monopoly Alrosa.
On defence, the two sides will seek to move ahead with long-delayed projects to develop a joint fifth-generation fighter jet and a multi-role transport aircraft.Possibly the most ambitious area for cooperation will be in nuclear energy, where Mr Putin is pushing for state-owned Rosatom to increase the number of nuclear reactors it could supply to as many as 25.
A 1,000-megawatt reactor is operating at the Russian-built Kudankulam power station in Tamil Nadu, with a second due to come onstream in 2015. Final documents to build reactors three and four should be signed at the summit, diplomats said.