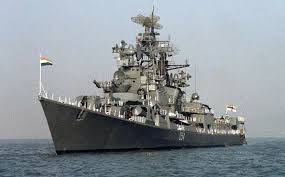 MUMBAI: Prime Minister Narendra Modi today dedicated INS Kolkata, the biggest indigenously-built naval destroyer, to the nation.”INS Kolkata is entirely built in India and it is a symbol of our self-reliance. It is a prime example of India’s technical abilities and will send a message around the globe,” Mr Modi said at the commissioning ceremony of the ship in Mumbai. No country will dare to challenge India after commissioning of INS Kolkata, the Prime Minister added.
He was accompanied by Defence Minister Arun Jaitley, Maharashtra Chief Minister Prithviraj Chavan, Chief of Naval Staff Admiral RK Dhowan and other dignitaries.”It is a historic day for India and its people. I hope this ship will enhance our Navy’s capacity,” Mr Jaitley said.
INS Kolkata, a part of the Kolkata Class destroyers of the Indian Navy, has been built at the Mumbai-based Mazgaon Docks, a defence Public Sector Unit.
With an operating range of 15,000 km, INS Kolkata, first of the three such ships that will join the Indian Navy in the next few years, is equipped to play a varied role. It has an in-built anti-submarine capability and can take on an anti-ship missile and fighter aircraft. It will also be the first Indian ship to be armed with the land attack, anti-ship BrahMos missile, also manufactured in India with Russian collaboration.
These capabilities give INS Kolkata an ability to operate without supporting fleet of ships. With an integral hanger and a landing deck for a helicopter, the guided missile destroyer will add teeth to the 140-ship strong Indian Navy, currently undergoing a massive expansion.
Although its delivery has been delayed way beyond the deadline, the warship’s induction will further boost the confidence of Indian shipbuilders. With 44 ships of varying shapes, capability and size under construction in Indian shipyards, the Navy is betting big on local expertise to build and enhance its fleet in the coming decade.