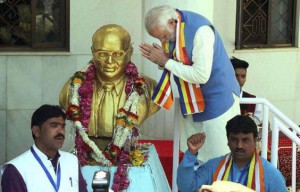 MHOW: (MP) : rime Minister Narendra Modi today paid rich floral tributes to Dr B R Ambedkar at his birth place in Kalipaltan area of Mhow cantonment town on his 125th birth anniversary.
Launching ‘Gram Uday Se Bharat Uday Abhiyan’ on the occasion at a rally in Mhow, Mr Modi said, India’s development won’t happen through 5 or 50 cities and industrialists and foundation of villages will have to be strengthened for sustainable development.
Listing a number of measures that his government is taking to carry forward the vision of Ambedkar including on maritime projects and the empowerment of weaker sections, he said, for so many years, the vision of Ambedkar was undermined.

He said, electricity will reach to 18,000 villages which do not have power in less than 1,000 days due to government’s initiatives. Earlier, the government had announced that these villages would be electrified in 1,000 days.

Making a strong pitch for developing villages, Mr Modi said accelerating rural development could be the biggest engine to boost the growth of the Indian economy and emphasized the importance of increasing purchasing capacity of villagers.

Mr Modi said, the government has taken a resolve to double the income of farmers by 2022, which will be accomplished.Mr Modi said that a planned development of villages can bring big changes and visions of personalities like Ambedkar and Mahatma Gandhi, who had written about Gram Swaraj, can create this awareness.
The Prime Minister said that nearly 10 lakh families have given up cooking gas subsidy in last one year adding that one crore poor had been given LPG connections in the same duration. He said, five crore poor will be provided cooking gas connections in three years.
Referring to his humble origins, Modi said that if the son of a woman, who used to fetch water in others’ houses could become Prime Minister, the credit for it goes to Ambedkar.