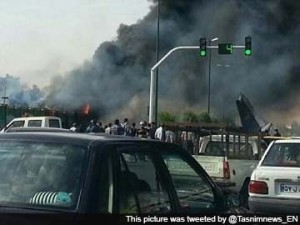 TEHRAN( IRAN) : A small Iranian passenger plane crashed Sunday while taking off from an airport near the capital, Tehran, state media reported. The country’s state-run news agency said 40 people were feared killed in the crash.The aircraft, an Iran-141 jet typically used for short domestic flights, crashed near Mehrabad airport, west of Tehran, Iran’s state-run IRNA news agency reported. The plane went down in a residential area, the agency reported.
“Initial reports indicate that the 40 people aboard the plane have been killed, including seven children,” IRNA reported. It did not identify a source for its claim.Iranian state television reported that it was a Taban Air flight.Iran has suffered a series of airplane crashes, blamed on its aging aircraft and poor maintenance. Many of the Boeing aircraft in IranAir’s fleet were bought before the country’s 1979 Islamic Revolution, which disrupted ties with the U.S. and Europe. The Iran-141 is a small passenger plane produced in Iran with Ukrainian technology.