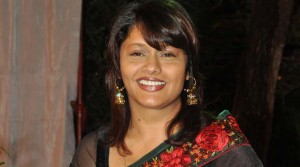 NEW DELHI: TV actress Pallavi Joshi is the recent celebrity to come in limelight post the FTII row over the appointment of Gajendra Chauhan as its chairman.After award-winning filmmaker Jahnu Barua reportedly expressed his wish to not consider him a part of the FTII society, Pallavi too has reportedly written to I & B Ministry asking them to no longer hold her as a part of the society and its governing council.
Noted actor Pallavi Joshi has resigned as member of the Film and Television Institute of India (FTII) Society, pledging support to the agitation by the students demanding removal of mini screen actor Gajendra Chauhan as chairman of the institute.”There is no point in continuing as member of the FTII Society if the students with whom I wanted to interact as future prospects of the film industry, are unhappy,” Joshi told PTI today.
Pallavi, who is a well known actress said she was eager to be a part of the society but if the students are not happy, then she too sees no point in continuing in the society.Chauhan, who is affiliated to the BJP, is known for the role of Yudhisthir in the epic teleseries `Mahabharat`.Over 200 students protested and went on strike over his appointment and demanded his removal last month.
Chauhan said the protest is not centered at one location, and that it is happening in different locations.”It is a conspiracy of some individual, who has a personal issue here. This matter is being politicised,” he said.Chauhan requested the striking students to stay away from this politics as it will not benefit them.
Speaking about his credentials to be appointed to the FTII post, Chauhan said, “I have been interviewed by the I&B ministry multiple times before I was put on this post. It was not an overnight decision by anyone.”Pallavi has acted in films like Badla & Aadmi Sadak Ka as a child artiste.