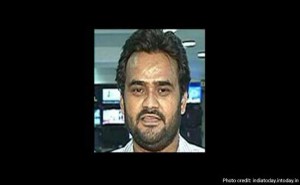 BHOPAL: One minute he was chatting. The next, he was frothing at the mouth and had collapsed.On Saturday, investigative journalist Akshay Singh, who had been on the trail of the Vyapam scam for four days, died mysteriously, becoming a statistic in the same story he was investigating. He is among the 35 people who have died in connection with this case since 2012.
The 38-year-old journalist had come to meet Mehtab Damor in Meghnagar in Jhabua, to discuss the death of his daughter Namrata, an accused in the scam.”He came in the afternoon at 1 pm. He wanted to know about Namrata and wanted to see her medical reports. He studied the file for half an hour. He was waiting for a photocopy of the reports,” Mr Damor told to a TV Channel.
Akshay was on the sofa, along with two other journalists, and “everyone was chatting peacefully”, said Mr Damor.
While waiting for his documents, the journalist lightly berated Mr Damor: “You are a gazetted officer but could not take care of your daughter.”Within moments, things went horribly wrong.”He started frothing at the mouth, his lips were trembling,” Mr Damor said.
“I got water…His right arm was raised…he couldn’t drink the water and became unconscious. We immediately took him to a government hospital. The doctor said his heart is not beating and he didn’t have the facilities to revive him.”
The doctor, Kailash Patidar, sent the group to another hospital, but Akshay had died by then.Dr Patidar said the journalist had suffered a heart attack. But Mr Singh’s family said he had no health problems. Delhi’s AIIMS hospital is now investigating how he died.