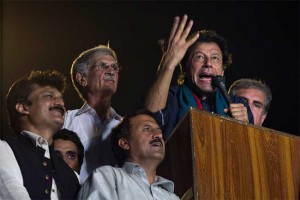 ISLAMABAD: A second round of talks are expected today between Imran Khan’s Pakistan Tehreek-e-Insaf or PTI, and the Nawaz Sharif government which is seeking to end a week-long impasse, that has included a protest by about 30,000 people in the heart of capital city Islamabad. Mr Khan is expected to attend.
Tthe 10 latest developments in the storyFor the first round of talks in Islamabad’s Mariott Hotel in the early hours of Thursday, Mr Khan sent a representative while he continued to picket the Red Zone, which houses key buildings including Parliament, the prime minister’s house and numerous Western embassies.
But his agreeing to come to the negotiation table was seen as a breakthrough. The opposition leader had earlier said he would hold talks only after Prime Minister Nawaz Sharif resigned. Several prominent ministers represented the government at the first round.Mr Khan and Tahir-ul Qadri, a cleric who has joined his protest, the ‘Azadi march’, claim that last year’s general election – in which Mr Sharif’s PML-N (Pakistan Muslim League-N) won a landslide victory – was rigged.
The election was rated as free and credible by international observers. Mr Sharif has refused to resign. This morning, before the PM addresses the National Assembly to brief lawmakers and the nation about the political crisis, the government will examine the PTI’s six-point demands. Mr Khan also wants the PM’s brother and Punjab Chief Minister Shahbaz Sharif to resign; he wants interim government installed while his rigging charges are probed; he wants electoral reforms before fresh elections; re-elections for all assemblies; he wants responsibility fixed for the alleged rigging of last year’s national election and an audit of government expenses.
Mr Khan and Mr Qadri have been summoned today by a three-member bench of the Supreme Court, which is investigating Mr Khan’s allegation that the national elections held last year were rigged. Last evening, a deadline set by Imran Khan for Mr Sharif’s resignation passed without the former cricketer carrying out his threat of storming the Prime Minister’s residence. “I thought I would take you all to the Prime Minister’s house today. (But) his heart is already in bad shape. If I ask my followers to go in that direction and he has heart attack – I cannot do that,” he said.Reuters reported that Mr Khan backtracked after Pakistan’s military called for a political solution to the crisis.
Pakistan’s army, seen as the country’s most powerful institution, is guarding the Red Zone.While Mr Khan held out earlier on Wednesday, refusing to talk to the government, Mr Sharif initiated talks with populist Mr Qadri through a cross-party delegation. After the talks, Mr Qadri asserted he would not compromise on his demands, but he added, “I have always been ready for dialogue”.Nuclear-armed Pakistan has experienced three military coups and Mr Khan’s protest raises fears of the army stepping in. Thus, opposition parties had shunned Mr Khan’s call to unseat the government and urged him to come to the negotiating table.