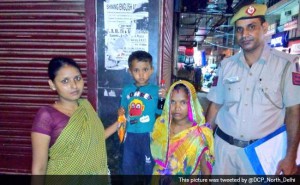 Chief Minister Arvind Kejriwal’s use of the world “thulla” – slang for policemen – has incensed the Delhi Police and added bitterness to ties that have never been trouble-free.

A senior police officer hit back with a pointed tweet today. Posting the picture of a child who had apparently been rescued by a policeman, Madhur Verma, a Deputy Commissioner of Police, tweeted: “One of our so called ‘Thu**a’ who rescued 4 yr old Khushbu from Kamla Nagar & reunited with her mother!!”

Two constables have filed complaints against the Chief Minister, who had used the word during an interview last week. “If a ‘thulla‘ of Delhi Police asks a roadside vendor for money, a case should not be registered against him… this is not acceptable,” Mr Kejriwal had said.
Constable Kapoor Singh Chhikara, one of the complainants, told NDTV: “Not just as policemen, but we as citizens of Delhi are offended.”
Mr Chhikara shared that he had saved lives during a fire in 1987 at a building in Connaught Place and had been part of the security detail of several important persons including the prime minister. “People have given Kejriwal 67 seats. He should focus on development. He has set a poor example as Chief Minister by using this word,” he said.
The bitterness forms the backdrop to a meeting between Mr Kejriwal and Delhi Police commissioner BS Bassi this afternoon. “These are personal remarks. It was a derogatory word, but a non-cognizable offence (police can’t act without a warrant or court order), so there is no FIR,” Mr Bassi said this morning.

Constable Harvinder, the second complainant, said he was hurt by Mr Kejriwal’s choice of words. “It has affected me mentally and I could not sleep all night,” said the cop in his complaint, describing how he had called at various numbers to express his anguish, including the Chief Minister’s residence and the Delhi government helpline.