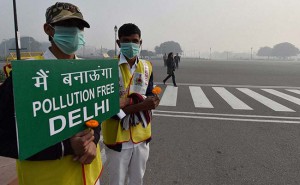 NEW DELHI: The experiment to curb the toxic smog in Delhi by banning private cars on alternate days has not gone down well with the high court. Judges today asked the government of Arvind Kejriwal to explain why the trial should last more than a week. Criticizing public transport as “insufficient”, people are inconvenienced, the judges said.
The court has asked the government to file an account by Friday on how pollution has been impacted by the new traffic rules, which were introduced on January 1 for a two-week period to cut smog in the world’s most polluted capital.
Cars with odd-numbered licence plates are allowed on the roads on odd-numbered dates, and those with even-numbered plates on the other days.
Yesterday, the Delhi government claimed the new traffic restrictions are registering an improvement in the city’s air, stating a “definitive declining trend” in the levels of Particulate Matter (PM 2.5), the tiniest and deadliest of all the microscopic particles. A report submitted by the government on the scheme so far was described as “vague” by the court today, which heard a series of petitions related to the traffic rules, including some that seek exemption for lawyers and senior citizens.
Delhi has been shrouded in a toxic blanket of smog in recent weeks as cooler temperatures trap pollutants in the atmosphere, pushing harmful PM 2.5 levels sky-high. These fine particles, less than 2.5 micrometres in diameter, are linked to higher rates of chronic bronchitis, lung cancer and heart disease after settling into lungs and passing into the bloodstream.
Pollutant levels in Delhi regularly hit 10 times the World Health Organization’s safe limits.Schools have been ordered to remain closed for the period, partly so that their buses can be used to ferry commuters to work.Critics say the restrictions do not go far enough, with motorcyclists and women driving alone exempt.

In a measure of mounting concern, the Supreme Court recently ordered a temporary ban on large new diesel cars in Delhi and doubled a tax on diesel trucks.