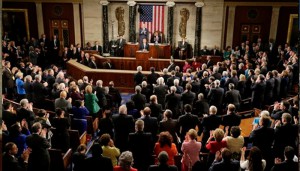 WASHINGTON: As Barack Obama laid out his agenda for 2015 in his penultimate State of the Union address, the President did not forget Charlie Hebdo victims and he used the address to symapthise with terror victims worldwide – from those attacked in Pakistan’s Peshawar school to the ones slain in Paris’ Charlie Hebdo magazine office.
“We stand united with people around the world who’ve been targeted by terrorists — from a school in Pakistan to the streets of Paris. We will continue to hunt down terrorists and dismantle their networks,” said Obama as he entered the second half of his speech.

As Obama was declaring US support for terror victims worldwide, dozens of US lawmakers lead by Democratic Representative Gwen Moore, held up yellow pencils in the honour of Charlie Hebdo attack victims.
The commando-style attack on French satirical weekly Charlie Hebdo was claimed by al Qaeda’s Kouachi brothers who killed 12 in the magazine’s office in Paris on Jan 7.
In a show of solidarity, some 40 US lawmakers flashed yellow pencils to pay tribute the Charlie Hebdo victims during Obama’s State of the Union address, AFP reported.People across the world held rallies that flashed posters featuring pencils and pens in order to pay tribute to Charlie Hebdo cartoonists who were attacked for sketching Prophet Muhammad cartoons.
Obama also vowed to hunt down the terrorists by disrupting their networks.Defensing his intervention in Iraq and Syria where the US is leading an anti-ISIS coalition, Obama said that they had managed to thwart ISIS advance in the Middle East.
Obama however highlighted, how “instead of getting dragged into another ground war in the Middle East, we are leading a broad coalition, including Arab nations, to degrade and ultimately destroy this terrorist group”.
Obama stressed on smarter American leadership, that involved “combining military power with strong diplomacy” rather than getting drawn into “unnecessary conflicts”.Obama also urged the Republican-led Congress to pass a resolution authorising the use of force against the ISIS.
“And tonight, I call on this Congress to show the world that we are united in this mission by passing a resolution to authorize the use of force against ISIL,” said Obama.