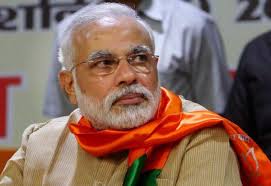 WASHINGTON: The United States swiftly courted India’s future prime minister Narendra Modi on Friday, saying the victorious Hindu nationalist would be welcome to visit despite a long-standing visa ban.The White House also said President Barack Obama hoped to speak to Mr Modi by telephone soon, following the Bharatiya Janata Party’s (BJP) landslide election victory.
US Secretary of State John Kerry also congratulated Mr Modi for his triumph in the biggest election in human history on his official Twitter feed, as Washington moved to forge early ties with the new centre of power in New Delhi.”The prime minister of India will be welcomed in the United States,” said White House spokesman Jay Carney.”The president looks forward to speaking with Mr Modi,” Carney said, though he cautioned it was too early at this stage to talk about a possible Modi visit to Washington.
“We congratulate Narendra Modi and the BJP on winning a majority of seats in this historic election.”Once the government is formed, we look forward to working closely with the prime minister and the cabinet to advance our strong bilateral relationship based on shared democratic values.”The United States refused Mr Modi a visa in 2005 over claims he failed to quickly curb deadly anti-Muslim riots three years before when he was chief minister of the state of Gujarat.
But as it became increasingly clear Mr Modi was riding a political wave in India, outgoing US ambassador Nancy Powell shook hands with him before closed-door talks.
Obama forged close ties with outgoing Indian Prime Minister Manmohan Singh and in 2010 visited a country which is a key target of his policy of pivoting US power to Asia.

But relations have drifted recently, antagonised by the arrest of an Indian diplomat in New York who was strip searched over claims she mistreated a domestic servant.

Preliminary results at the end of India’s marathon six-week election showed the BJP on track for the first parliamentary majority by a single party since 1984.

There has been a growing sense that Washington was only waiting for the election to take place before reengaging with New Delhi.

The departure of Powell, a veteran diplomat, less than two years into her troubled term, was seen by some in India as a sign that Washington wanted to revive relations.

On his visit in 2010, Obama called the budding strategic relationship between the United States and India as “one of the defining partnerships of the 21st century.”