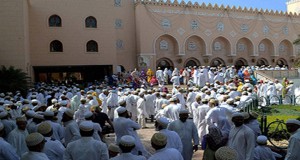 MUMBAI :  Eighteen people died and 60 others were injured at a stampede ahead of the funeral of spiritual leader Syedna Burhanuddin in Mumbai on Saturday. The stampede occurred in Malabar Hill area as the people had gathered to pay last respect.
Police said the stampede happened after the gates to his residence were closed around 1:30 am. Of the 60 injured, 57 have been discharged. Sources said the funeral will take place as scheduled despite the stampede.
Mumbai Police Commission Satyapal Singh admitted to the lapses. He said, “Neither the police nor the organizers thought of the the huge turnout of devotees. Eighteen people have died and most deaths due to suffocation. When the gate was closed, there was suffocation.”
BJP prime ministerial candidate Narendra Modi expressed condolences to the families of those died in stampede. “Stampede near Syedna Sahib’s residence is very unfortunate. Condolences to families of those who lost their lives and prayers with the injured.”
The 102-year-old Dawoodi Bohra spiritual leader Syedna Mohammed Burhanuddin passed away on Friday after a cardiac arrest at his residence in South Mumbai. His 70-year old son Syedna Mufaddal Saifuddin has succeeded him, it was announced here.
“Born in Surat, he was the leader of the Dawoodi Bohra community after succeeding his father Syedna Taher Saifuddin in 1965. Under his leadership, the community has achieved remarkable social, economic and educational success across the world.
“Known as ambassador of peace and goodwill, he was highly respected by world leaders and governments for his endeavours in promoting international brotherhood and harmony,” the spokesperson said.
He was honoured with highest civilian titles like the Star of Jordan and Order of the Nile by the respective governments of Jordan and Egypt. Syedna was conferred Honourary Doctorates for his efforts in social and educational development by renowned institutes like Al-Azhar University, Cairo, Aligarh Muslim University and University of Karachi.
In Mumbai, the one of its kind Raudat Tahera mausoleum which has the entire Quran inscribed in letters of gold and bejewelled with precious stones; the world class Saifee Hospital; and the on-going ambitious Saifee Burhani Upliftment project of the redevelopment of Bhendi Bazaar are some of the major initiatives of Syedna in the city.
In 2011, Syedna had proclaimed Nass (investiture) upon his second son Syedna Mufaddal Saifuddin in London. The 70-year-old successor is the rector of the community’s 200-year-old institution Jamea-tus-Saifiah, which has campuses in Surat, Karachi, Mumbai and Nairobi.
“He was closely associated with the late Syedna and has received much of his spiritual guidance under the tutelage of his revered father.
Highly respected among the community members, Syedna Mufaddal Saifuddin travelled widely with his father and met heads of states and other distinguished personalities across the world, he said.
Among the many projects that Syedna Mufaddal Saifuddin has worked under Syedna’s directions in the restoration of famous Fatemi Masjids in Egypt and other edifices in the Arab world, he said.
Syedna Mufaddal Saifuddin will lead the Namaz-e-Janaza of the late Syedna at Saifee Masjid at Bhendi Bazaar. The late Syedna will be laid to rest at Raudat Tahera mausoleum in Mumbai.