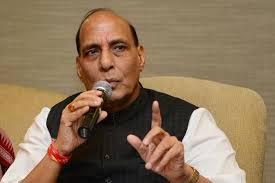 NEW DELHI : Union Home Minister Rajnath Singh said today there will be increased centre-state cooperation in dealing with Maoism.“The central government will respond positively to the suggestions of the states in overcoming this problem (Maoism) in a coherent and cohesive manner. There will be better co-ordination between the centre and states through the confidence and commitment of all concerned,” the home ministry quoted Rajnath Singh as saying.
The minister who chaired a high level meet of chief secretaries and DGPs of Maoist-affected states, assured that the projects relating to road connectivity and telecom connectivity through mobile towers should be taken up on a priority basis.
He asked state governments to designate their nodal officers for better co-ordination with the central government and other states in tackling left wing extremism.He added that young, bold and courageous district magistrates and superintendents of police may be posted in initial years of their posting in Maoist-affected areas to provide better administration and leadership.
“The surrender and rehabilitation packages may be revised to make it more attractive for the militant and Jan Militia cadres,” he said, hinting there may be talks between the government and such Maoists as were willing to give up arms.
Chief secretaries and DGPs (directors general of police) of Chhattisgarh, Jharkhand, Bihar, Odisha, West Bengal, Madhya Pradesh, Uttar Pradesh, Maharashtra, Andhra Pradesh and Telangana and chiefs of paramilitary forces like CRPF and BSF and top officials of the home ministry attended the meeting, chaired by Rajnath Singh.