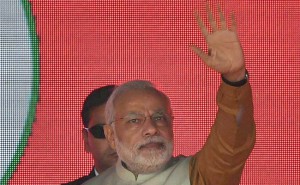 NEW DELHI : After leading his party to an outsized win in Delhi, Arvind Kejriwal received a congratulatory call from Prime Minister Narendra Modi, who tweeted this information:
Mr Kejriwal, who will return for a second term as Chief Minister, reportedly told the PM that he would like a meeting as soon as possible. “Yes, we will meet for tea,” the PM reportedly said, according to a news agency ANI.
Mr Modi defeated Mr Kejriwal by a huge margin in the national election last year where they ran for Parliament from Varanasi.The PM campaigned extensively for the BJP in Delhi, but the party was trounced by Mr Kejriwal and his Aam Aadmi Party.