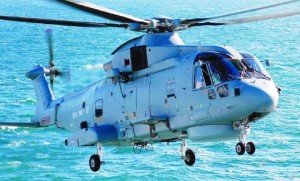 New Delhi : Ending a deadlock that lasted almost a year, the government Wednesday terminated the Rs 3,546-crore VVIP Chopper deal  on the grounds that Anglo-Italian firm AgustaWestland had breached the integrity pact by allegedly paying kickbacks.
The formal cancellation of the deal was announced after Defence Minister A K Antony met Prime Minister Manmohan Singh and apprised him of developments in the case. India had frozen the deal in February following a series of reports in The Indian Express that exposed claims that kickbacks worth 51 million euros were generated in the deal to supply 12 state-of-the-art helicopters to the IAF to fly VVIPs .
Over the last two years, the paper reported extensively on the complex web of middlemen, fixers, officials as well as the alleged money trail of the bribes said to have been paid to bag the contract.
While India has paid more than 45 per cent of the contract amount after the deal was signed in 2010, it has so far received only three aircraft. Termination of the deal means no more money will be paid and the government will take steps to recover the payment already made.
“The Government of India has terminated with immediate effect the Agreement that was signed with M/s. AgustaWestland International Ltd., (AWIL) on 8 February 2010 for the supply of 12VVIP helicopter on grounds of breach of the Pre-Contract Integrity Pact (PCIP) and the Agreement by AWIL,” the government statement said.

The cancellation of the deal has been complicated by the fact that AgustaWestland late last year invoked the arbitration clause in the contract, taking legal recourse after the government had frozen payments in February.

On Wednesday, the government said while it has been of the view that the integrity related issues are not subject to arbitration, it has decided to participate in the process since AgustaWestland has been insisting on it.

“AgustaWestland has since pressed for arbitration and appointed an arbitrator from its side. In view of this, MoD sought afresh the opinion of the Attorney General. With a view to safeguard the interests of the government, MoD has nominated Justice B P Jeevan Reddy as its arbitrator,” the government said. The government believes that scrapping the contract will ensure minimum loss to the exchequer as India will be able to recover all payments made, with interest, from the manufacturer.
The integrity pact that was signed by AgustaWestland on October 3, 2008 and is also mentioned in the final contract, specifies that the seller cannot employ any individual or firm to intercede on its behalf for an Indian contract.However, investigations in Italy have determined that the company had in fact appointed at least three middlemen – Christian Michel, Guido Haschke and Carlo Gerosa – to allegedly fix the deal.
The three had allegedly used their contacts in India with politicians, officials as well as the family of former Air Chief S P Tyagi to get crucial technical requirements changed so that the Italian machine could qualify for the contract. It has been alleged that the testing process was also fixed with the help of the middlemen to ensure that the AW 101 chopper emerged as the winner.
The final push for the defence ministry to terminate the contract came in the form of court documents from Italy where investigators have exposed the alleged money trail and that as much as 51 million euros were paid by AgustaWestland to the three middlemen thorough bogus work contracts. These contracts included “media management”, media monitoring as well as software engineering.
India has made two payments for the helicopters. While the first one was 86,439,303 euros or 15 per cent of the value of the contract, the second tranche was for 166,878,607 euros that amounted to 30 per cent of the contract value.
Under procurement rules, the seller had to provide full bank guarantees for the 45 per cent payment already made. The integrity pact also has clauses that make it mandatory for the seller to return all the money paid, along with an interest rate, in case the pact is violated.Indian Express.