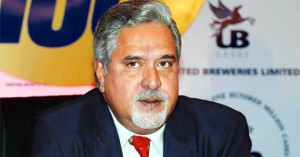 BANGALURU: UB Group Chairman Vijay Mallya has resigned as the non-executive chairman of Unites Spirits Limited (USL) with immediate effect. The announcement was made by Mr Mallya on Thursday evening through a statement.
Recently there were various allegations and uncertainties regarding Mr Mallya’s relationship with Diageo the majority stakeholder of USL. British alcoholic beverages company Diageo had purchased majority stake of about 54 per cent in USL in July 2014 and since then there was tussle between Mr Mallya and Diageo.

After the acquisition of majority stake in Mr Mallya’s USL Diageo had pushed for exit of Mallya and which he had declined. As on December 31, 2015 Mr Mallya holds around 3.99 per cent stake in USL.
“The time has now come for me to move on and end all the publicised allegations and uncertainties about my relationship with Diageo and United Spirits Limited. Accordingly, I am resigning my position with immediate effect,” stated Mr Vijay Mallya in a statement which was forwarded to the media.
“Having recently turned 60, I have decided to spend more time in England, closer to my children,” the statement added.
In another statement Diageo said Mahendra Kumar Sharma, who is currently the independent non-executive director and Chairman of the Audit Committee of USL will be appointed as the new Chairman of USL.
The financial terms of today’s agreement with Dr Mallya provide for a payment of $75 million (approximately £53 million) to Dr Mallya over a five year period. This payment will be charged to exceptional items in the year ending 30 June 2016,” Diageo said in a stament.

As per the agreement with Diageo Mr Mallya has also signed a global (excluding United Kingdom) 5 year non-compete arrangement. Mr Mallya will now be the Founder Emeritus of United Spirits.Earlier, there were reports that board of directors of USL had asked Mr Mallya, to resign from the board after an internal probe which found financial irregularities in the company.
.“I have agreed a mutual release with both Diageo and United Spirits from claims concerning the alleged irregularities disclosed by USL in April 2015,” he added.
Meanwhile Ivan Menezes, Chief Executive of Diageo, said: “India is an exciting growth opportunity, and USL has the management team, strategy and capability to deliver on that opportunity. The agreement announced today is in the best interests of both Diageo and USL and allows USL to build on its strong platform in one of the biggest spirits markets in the world.”