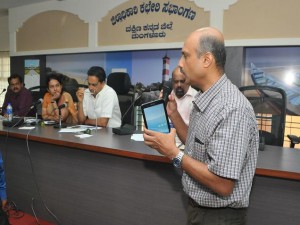 MANGALURU: By the end of this month, health workers will be seen with tabs enabled with the Malaria Control Software to detect the source of Malaria and act against it within the stipulated time.The software, which has already had trial runs, will be operational by the last week of May.
The then Mayor of Mangaluru, Mahabala Marla had initiated the work of preparation of the software, which was found necessary as majority of cases of Malaria in the state were from Mangaluru.This software will be used in the tabs given to the 50-odd Multi-Purpose Workers (MPW) of the Mangaluru City Corporation involved in source identification and destruction.
Mangalore Medical Relief Society took up the task and the company I Point was entrusted with development of the software.In a meeting to review Malaria Control programme held at the office of the Deputy Commissioner, the Managing Director of I Point Naren Koduvattat said that the software has been enabled to spot places where mosquito carrying Malaria parasite breeds, report cases of Malaria and follow-up action.
He said each of the 80-odd laboratories that have been set-up, will be reporting cases of Malaria that will be reflected on a separate website being developed for the purpose. Soon after it is reported, message goes to the concerned MPW, who has to report the source of Malaria around the victim’s house and destroy it.A set of officials will be monitoring the whole process on a daily basis. The software allows a citizen also to report cases of Malaria.