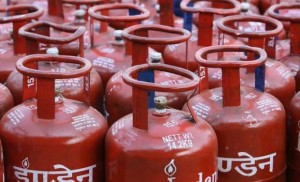 NEW DELHI: LPG consumers across the country will from Thursday get cash subsidy directly into their bank accounts so that they buy the cooking fuel at market price.
Domestic LPG users will get Rs 568 in the bank account the moment they join the Direct Benefit Transfer Scheme for LPG, which has now been renamed PAHAL. They will have to use this money to buy 14.2-kg refill at the market price.
Currently, the subsidised LPG costs Rs 417 per 14.2-kg cylinder while a market-priced refill costs Rs 752 in Delhi. It will be priced higher in other cities depending on local taxes.
The ambitious plan, launched by the previous UPA government in June 2013 but abruptly stopped earlier this year following court orders, has been modified to exclude the requirement of unique identification number (Aadhaar) for availing the cash subsidy.

“Consumers who wish to join the scheme will have to either link their Aadhaar number into their bank account and their LPG consumer number or if they do not possess Aadhaar number, they will have to link their bank account directly with their 17 digit LPG Id,” an official statement said here.
PAHAL or ‘Pratyaksh Hanstantarit Labh’ was rolled out in 54 districts from November 15 and will extend to rest of the country from January 1.Under the scheme, LPG consumers will get cash subsidy to buy twelve 14.2-kg cylinders or 34 five-kg refills.
Cash equivalent to the difference between the current subsidised rate and the market price is transferred to the bank account of a consumer the moment he or she makes the first booking for a cylinder after joining the scheme. The moment a consumer takes delivery of the cylinder, another advance cash subsidy is transferred to the bank account.
“Camps are being set up at various banks and LPG distributors’ premises to enable consumers open bank account and enroll for Aadhaar if they need to do so to join the scheme,” the statement said.The scheme will cover over 15.3 crore consumers across 676 districts of the country.
Currently, over 6.5 crore consumers (43 percent) have already joined the scheme and will receive subsidy in their bank accounts.
In Delhi, of the 50.68 lakh LPG consumers, 16.63 lakh have already become Cash Transfer Compliant (CTC), it said.
“DBTL is designed to ensure that the benefit meant for the genuine domestic customers reaches them directly and is not diverted. By this process, public money will be saved,” the statement said.
So far, Rs 624 crore have been transferred to over 20 lakh LPG consumers since the launch of the scheme on November 15.
“LPG consumers who do not wish to avail the subsidy can simply choose to opt out of it. Over 12,000 citizens have already voluntarily given up subsidy, freeing up crores of subsidy amount,” the statement said.
DBT (Direct Benefit Transfer) is designed to ensure that the subsidy meant for the genuine domestic customers reaches them directly and is not diverted.The government is looking at saving Rs 10,000 crore in subsidy by curbing diversions and pilferages.
In 54 districts covering 11 states, the scheme covers 2.33 crore households.
Currently, the Aadhaar generation level is 95 per cent in these districts.Under the scheme, consumers will now receive SMS at every stage of enrollment.