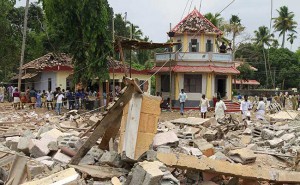 KOLLAM: Nearly 106 people have been killed and over 380 are injured in a massive fire that broke out at the Puttingal Devi temple in Kerala’s Kollam before daybreak around 3:30 a.m on Sunday. The fireworks ceremony was held as part of the annual festival of the temple, near Kollam.

At least 106 persons were killed and over 350 injured after a fire broke out at the Paravur Puttingal Devi temple around 3:30 a.m on Sunday. The fireworks ceremony was held as part of the annual festival of the temple, near Kollam. 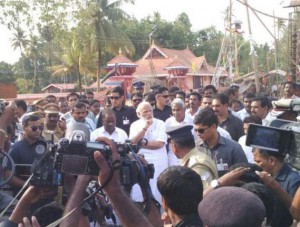 Many of the injured died before they could reach a hospital. Victims were also admitted to the Thiruvananthapuram Medical College Hospital and at various private hospitals in Kollam.
The explosion was caused when the storehouse of the fireworks materials caught fire. In the impact of the explosion, the office building of the Travancore Devaswom Board near the storehouse was blown off.
Sparks which flew from the fireworks on display landed on the storehouse and caused the explosion, preliminary reports say. There is a district level ban on pyrotechnics at temples but these are held on the basis of temporary permits annually. Such permits are given on religious tradition grounds.

According to officials 10,000-15,000 people were present at a ground next to the temple in Paravur watching fireworks during a festival to honor Goddess Kali when the fire started a little after 3 am.
Within minutes, huge flames engulfed the temple. Chief Minister Oommen Chandy has said the temple was not given permission for the “competitive fireworks”, a tradition during the seven-day festival. A police case has been registered against temple authorities. A judicial probe has been ordered into the fire.
The all-night fireworks display had been banned by the district administration after a complaint by a woman who lived close to the temple. “The Additional Distinct Magistrate had not given permission for the fireworks. They display was being held in violation of orders,” a senior police official said.”

PM Modi, who tweeted that the fire was “heartrending and shocking beyond words,” has brought along with him a team of 15 burn specialists from Delhi.
Visuals on TV showed huge clouds of white smoke and explosions in the night sky. Successive explosions sent huge chunks of concrete flying as far as a kilometer according to a witness. Some parts of the temple roof caved in.

“I saw huge pieces of concrete flying through the air when the explosion took place. Some chunks landed in our yard too,” a resident of the area said.

The injured have been taken to 10 hospitals in and around Kollam. Those critically injured are being shifted to hospital using choppers. Three naval ships, a Dornier aircraft and 10 air force and naval helicopters have joined rescue efforts.
Home Minister Rajnath Singh said he has spoken to Kerala Chief Minister Oommen Chandy and assured all help.