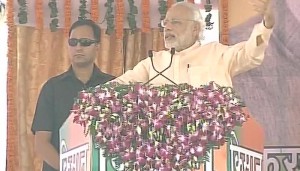 BAREILLY: As a part of the efforts to create awareness about the Centre’s pro-farmer initiatives including the new crop insurance scheme by the NDA government, Prime Minister Narendra Modi addressed a ‘Kisan Swabhimaan Rally’ in Bareilly on Sunday. Here is all what he said:-
– I appeal not only to the Uttar Pradesh Government but to all the state governments to give utmost priority to addressing farmers’ issues and issues related to agriculture: PM Modi
challenges before our farmers, but these challenges can be transformed into opportunities: PM Modi
I urge all farmers to avail all benefits given under Pradhan Mantri Fasal Bima Yojana: PM Modi
I urge farmers to use Soil Health Card so that necessary measures can be taken to improve soil quality depending on the needs: PM Modi Have asked state governments to use MGNREGA income to develop agriculture, improve water supply in rural areas: PM
I wish to double the income of farmers by 2022 when India will celebrate 75 years of its Independence,” PM Modi said addressing farmers in Bareilly.
‘Mann ki Baat’: What PM Modi, Tendulkar and Viswanathan Anand told students – As it happened
MUST READ’Mann ki Baat’: What PM Modi, Tendulkar and Viswanathan Anand told students – As it happened Earlier, on Saturday, the Prime Minister had addressed a farmers rally in Belgaum of Karnataka.
“The negative effects of the global slowdown can be effectively tackled by simultaneously promoting agriculture, manufacturing and service sector,” the PM had said.
“Everyone in the world, whether it is the IMF, World Bank or rating agencies, are saying that if there is a ray of hope then it is in India. The economic condition of the entire world is in shambles,” he added.He said that even the opposition parties, who target the government day and night, haven’t accused the NDA government of corruption.