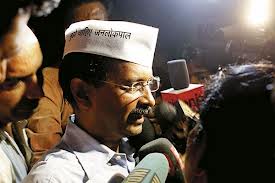 New Delhi :  Arvind Kejriwal will be sworn in as Delhi’s new Chief Minister at noon on Saturday in the capital’s sprawling Ramlila Maidan, from where he launched a massive campaign in 2011 along with his mentor Anna Hazare for a Lokpal or an anti-corruption ombudsman. Six newly elected members of Mr Kejriwal’s Aam Aadmi Party (AAP) will also take oath as ministers in the Delhi cabinet.
Here are the latest updates on this story: The AAP has invited Anna Hazare for the swearing in ceremony, along with Kiran Bedi and Santosh Hegde, who worked with Mr Kejriwal for the Lokpal campaign as part of the former “team Anna”.
Mr Kejriwal will lead the youngest cabinet ever (meet team Kejriwal). His close aide Manish Sisodia is expected to get an important portfolio. Rakhi Birla, 26, will be the youngest member of the cabinet. The other ministers-to-be are Somnath Bharti, Saurabh Bhardwaj,Girish Soni and Satyendra Jain. (Arvind Kejriwal’s AAP picks its ministers, sends 6 names to Lt Governor)AAP defused a potential crisis yesterday after its newly-elected legislator Vinod Kumar Binny reportedly revolted after being left out of the list of ministers. He reportedly came around after a late night meeting with AAP leaders Sanjay Singh and Kumar Vishwas. This morning, Mr Binny denied any rift. (AAP leader Vinod Binny denies rift with party over cabinet post)
Mr Kejriwal has refused police security and a large house as chief minister. He says he wants to live in a small flat instead. He has repeatedly asserted that his party will end the “VIP culture” that politicians are attuned to, starting with its most offensive symbols – the vehicles with beacons or lal batti cars, and heavy security.At a ‘janta durbar’ or public meeting this morning, he said, “the people are my biggest security. Whoever is worried about my security, please pray. That is all I ask for.”
Reacting to reports of a Congress rethink on support to his party, Mr Kejriwal also said his party was not in an alliance with either the Congress or the BJP. “We are concentrating on issues, not support. Whoever supports our 18-point agenda supports us,” he said.Senior Congress leader Janardhan Dwivedi admitted yesterday that a large section of the party does not believe it should support the AAP. Sources say the Congress will not rethink support to the AAP now, but will indicate that it could revisit its decision if the new government does not keep its promises to voters. (read: Congress says no rethink)
Mr Kejriwal said his government’s first task would be to immediately start the auditing of Discoms, or power distribution companies, who have been accused of overcharging consumers.The AAP government will also begin the supply of 700 litres of water free to every Delhi household “within 24 hours of taking over”, Mr Kejriwal said. This promise, expected to cost the government 340 crores a year, was described as unrealistic by the outgoing Congress, which was decimated by the one-year old AAP after 15 years in power.
The year-old Aam Aadmi Party surpassed all predictions and placed second in the Delhi elections. The BJP was in first place but did not manage a majority and said it would not try to form the government. The Congress was relegated to a paltry third place.