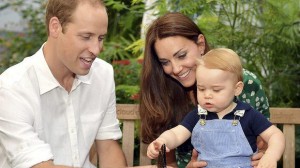 LONDON: Britain’s Prince William said on Monday he was “thrilled” that his wife Kate is pregnant with their second child, but admitted it had been a “tricky few days” as she struggles with severe morning sickness. Kate cancelled an official engagement on Monday because she is suffering from hyperemesis gravidarum, the same condition that caused her to be hospitalised in 2012 when she was pregnant with her first child Prince George.
William attended the public event in Oxford without her and told reporters: “It’s been a tricky few days, a week or so, but obviously we’re immensely thrilled, it’s great news.” Expecting their second child: The Duke and Duchess of Cambridge. Expecting their second child: The Duke and Duchess of Cambridge. Photo: Reuters He said it was still “early days, but I’m hoping things will settle down and she feels a bit better”, adding:
“I’m going to go back to look after her now.” Advertisement The royal palace revealed the good news on Twitter. “The Duke and Duchess of Cambridge are very pleased to announce the The Duchess of Cambridge is expecting their second child,” came the first message, mid-morning UK time. “The Queen and members of both families are delighted with the news that Their Royal Highnesses are expecting their second child.
” The news follows weeks of speculation. It seems most likely the new royal was conceived shortly after the couple’s tour of Australia and New Zealand. An official statement from Clarence House said that Kate was unwell because of the pregnancy: “Her Royal Highness will no longer accompany The Duke of Cambridge on their planned engagement in Oxford today. The Duchess of Cambridge is being treated by doctors at Kensington Palace.
” Prime Minister David Cameron tweeted: “Many congratulations to the Duke and Duchess of Cambridge. I’m delighted by the happy news that they’re expecting another baby.” The Duchess’ illness may have forced the couple to reveals details of the new baby before the conventional 12-week stage, according to the Daily Mail. The tabloid reported the illness could affect a number of upcoming engagements for the Duchess, so rather than fuelling speculation they decided to go public.
Her planned first solo foreign visit, to Malta in a few weeks’ time, is in doubt, though no decision has yet been made. However, she is still due to attend the opening ceremony of Prince Harry’s Invictus Games for injured soldiers in London on Wednesday. The severe morning sickness that hit the Duchess during her first pregnancy was also the cue for the couple to announce Prince George was on the way. St James’s Palace announced the news after the Duchess was admitted to hospital in December 2012. Their second child will be fourth in line to the throne after Charles, William and George – pushing Harry down to fifth spot.
The announcement is curiously timed for two reasons – later this week is the inquest into the death of nurse Jacinta Saldanha, who put through the Australian radio hosts who called the hospital during the Duchess’ first pregnancy. It also comes barely a week before the Scottish independence referendum, sparking furious speculation as to whether it will provide an accidental (or otherwise) badly-needed boost to the Better Together campaign.
Under the plan outlined by the Yes campaign, the Queen would stay Queen of Scotland. However, royal baby mania is likely to make the Scots look more fondly on their southern neighbours and the Union in general. In a cheeky attempt to defuse the threat to his independence campaign, Scotland’s first minister Alex Salmond drew attention to the couple’s links to Scotland. “Congratulations & best wishes to the Earl & Countess of Strathearn,” he tweeted. “Wonderful to hear they’re expecting their second baby – very happy news!”
To honour their marriage, the Queen gave Kate and William Scottish titles as the Earl and Countess of Strathearn – a title which dates back to the mid-14th century. Prime Minister Tony Abbott was also quick to pass on his congratulations to the couple. In a press release he said: “It is an exciting time in any young family’s life. People across the country were delighted to welcome the Duke and Duchess and young Prince George to our shores earlier this year.
“The young Royals’ deep and growing affection for Australia was evident and people delighted in meeting the young Prince. This is an exciting time for the Cambridges and I look forward to welcoming their growing family back to Australia.” The baby is expected in April next year, according to several news sources. Read more: http://www.smh.com.au/lifestyle/celebrity/kate-middleton-and-prince-william-announce-they-are-expecting-second-child-20140908-10e4i7.html#ixzz3CnW3FGve