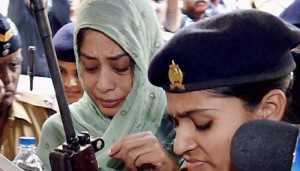 MUMBAI: Former media baron Peter Mukerjea’s wife Indrani, who is the prime accused in murdering her own daughter Sheena Bora, on Friday filled a 17-page bail in the special CBI court here seeking bail on medical grounds saying that she was suffering from frequent “blackouts”.
In the plea which has been moved through Indrani’s lawyer, the former media executive said that her medical condition is deteriorating and she has lost 18 kilograms in 4 months.She further wrote in the application that she wants to live in a stress-free environment.
“(Indrani) is suffering from ‘chronic small vessels ischemic changes’, and as a result the supply of oxygen to brain may get interrupted which may result in brain stroke and is life threatening,” read her bail application, which was annexed with medical documents that ran into about 50 pages. According to a news Agency report Indrani  has also said that she gets blackouts time and again due to her condition.
In the application, Indrani said that it takes around 45-60 minutes to reach hospital from Byculla women’s prison (where she is presently lodged now). Citing an instance, she said that in October last year when she fell unconscious, it took more than six hours to commence treatment on her
On October 2, 2015 (Indrani) was unconscious at 5 am but was treated at 11:45 am,” her bail application said.The bail plea comes a day after a special court granted permission to Central Bureau of Investigation (CBI), who is probing the case, to grill Indrani, her former husband Sanjeev Khanna and driver Shaym Rain.