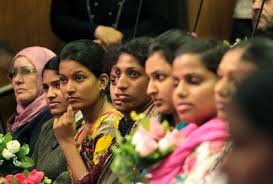 NEW DELHI : All the 46 Indian nurses released by the Islamic State of Iraq and Syria (ISIS) militants will be flown directly from Erbil in Kurdistan to Kochi in a special aircraft, sources said. The nurses are expected to reach Kochi at around 7 am on Saturday.According to Sources  the nurses will stay in Erbil on Friday and all necessary travel documents will be provided to them. Kerala government sources added that a special chartered flight is waiting at Erbil Airport along with one state and one Central government representative to bring the stranded nurses back home.
Earlier, the International Red Cross confirmed that all the 46 Indian nurses had been freed by the ISIS and the information conveyed to the Indian government officials. Senior journalist in Iraq Girish Menon confirmed the development and assured that all nurses are safe.Some nurses had called up their families in India to tell them that they have been told that they will be dropped at Erbil Airport. Though it is yet to be confirmed from official authorities, sources in Kerala government have also said that they are aware of the development.
The nurses had been taken away by ISIS militants from Tikrit to an old building somewhere in Mosul late on Thursday night. “We have been taken to some place that looks like an old company and have been kept in a hall. This place is near Mosul. We saw the Kirkook general hospital, and also passed the Al Jamoori Hospital. Throughout the journey the militants were nice to us – even provided food, biscuits and water. We want someone to help us,” one of the nurses had earlier said.
The news of the nurses being moved by the ISIS was confirmed by the Ministry of External Affairs as well as Kerala Chief Minister Oommen Chandy on Thursday who said the Indian nurses were moved in a bus.Kerala CM Chandy has said that there was an incident outside the bus when they were getting into it and that some of them are injured. The families of the nurses have sought help from the MEA.
Sources told that they were safe in the custody of the militants and that they were currently placed in an old building somewhere in Mosul. Amidst reports of some of the captives getting injured in an explosion, the nurse told that the militants had not harmed them. Instead, they had provided them food and water.
Another group of 39 Indians remains in captivity and was “unharmed”, the External Affairs Ministry Spokesperson said. There are about 100 Indians in the conflict zone, though an exact number was not possible to give, he said. The Spokesperson said India was not alone in working for the safety of its nationals and it has partners “inside and outside Iraq”.
Meanwhile, a crisis management group has been formed to handle Iraq crisis. The group will be headed by Foreign Minister Sushma Swaraj. NSA, IB chief and RAW chief will be the members of the group.
MEA has already given air tickets to nearly 1000 Indians to travel out of Iraq. 1500 Indians want to leave the country and have registered with the ministry. In Erbil also, some Indians have conveyed to MEA officers that they want to leave, the Spokesperson said.
There were about 10,000 Indians before the start of the serious strife between government troops and Sunni militants, backed by al Qaeda. The militants have captured two key cities and are marching towards Baghdad. Hundreds of thousands of Iraqis have been displaced in the fighting that broke out on June 10.