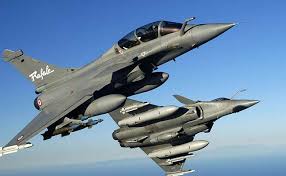 NEW DELHI: India’s much-negotiated deal with France for 36 fighter jets is final – it will buy the French-made Rafale planes for 8.8 billion dollars, said sources. The agreement is to be signed within three weeks and it will take at least 18 months for India to get the first lot of aircraft.
France initially sought nearly 12 billion dollars for the sale of 36 fighters complete with weapon systems. India has closed the deal nearly 3 billion dollars below France’s asking price.

Prime Minister Narendra Modi during a visit to Paris last year confirmed India’s order of 36 read-to-fly jets. Before that, the Defence Ministry had sanctioned the purchase of 120 planes, but the deal was scaled down dramatically after both sides were unable for years to agree on the unit price and the assembling of the planes in India.

The Rafales are made by manufacturer Dassault Aviation. During PM Modi’s visit, the countries agreed that the deal would be handled between their governments.
The Air Force has stressed it needs to start replacing its ageing jet fleet from 2017 to effectively check the capabilities of Pakistan and China.
The Rafale fighter is manufactured by Dassault AviationAs the negotiations stretched – and a deal was not reached during French President Francois Hollande’s visit to India in January, Defence Minister Manohar Parrikar said he is “a tough negotiator” and needed time to ensure a good bargain. The Air Force has repeatedly been asking for its ageing warplane fleet to be urgently modernised.
Sources say that as part of the government’s push to develop and support military manufacturing at home, in exchange for selling India off-the-shelf Rafales, French companies including Dassault will have to invest three billion dollars in India to help firms here with stealth-capability and radar technologies.