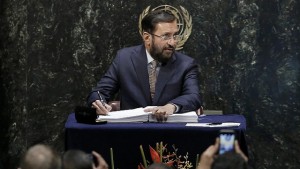 NEW DELHI: India today signed the historic Paris climate agreement  along with more than 170 nations, marking a significant step that has brought together developing and developed nations for beginning work on cutting down greenhouse gas emissions to combat global warming.
Environment Minister Prakash Javadekar signed the agreement in the UN General Assembly hall at a high-level ceremony hosted by UN Secretary-General Ban Ki-moon. The ceremony was attended by heads of government, ministers, corporate leaders and artists.

“This is a moment in history. Today you are signing a new covenant with the future,” Ban said, adding that, “We are in a race against time.” The opening ceremony included music from students of New York’s Julliard School and a short video bringing the “gavel moment” from Paris to the signature ceremony.
At 171 nations, the signing ceremony for the climate agreement set the record for the most countries to sign an international agreement on one day, previously set in 1982, when 119 countries signed the Law of the Sea Convention. The signing is the first step toward ensuring that the agreement comes into force as soon as possible.

After the signing, countries must take the further national (or domestic) step of accepting or ratifying the agreement. The agreement can enter into force 30 days after at least 55 Parties to the UNFCCC, accounting for at least 55 per cent of global emissions, ratify the agreement.
India has maintained that the burden of fighting climate change cannot be put on the shoulders of the poor after decades of industrial development by the rich nations. It has announcedplans to quadruple its renewable power capacity to 175 gigawatts by 2022 as part of the government’s plan to supply electricity to every household.
India seeks to add 100 gigawatts of photovoltaic capacity, 60 gigawatts of wind power, 10 gigawatts of biomass and five gigawatts of hydro projects. Finance Minister Arun Jaitley, in an address to a city- based thinktank earlier this week, had said that notwithstanding its development need, India is completely committed to protecting the climate.
“The level of development we have reached is far, still the hard reality is we have a lot of distance to cover. We need more housing, power, toilets, roadsand factories. Therefore our requirements of fuel is certainly going to increase. Notwithstanding that our own standards of protecting the environment are very rigid,” Jaitley had said.
“There is a method in each one of the steps we are taking” like taxing oil, cess on coal and emphasis on alternative renewable energy, he had said. “We are conscious of our responsibilities,” he said.
“The developed world has caused the climate change of today because of their 100 years of relentless carbon emissions. We are much cleaner at our development stages as compared to those of the developed world,” he said, adding that the developed world “behaved irresponsibly” and the developing nations are suffering.

India, which along with the United States and China, is world’s top greenhouse gas emitter, has maintained that its energy needs will be enormous going forward as it needs to lift millions out of poverty, develop its infrastructure and provide basic amenities like toilets, affordable houses and expand public transport.

About 13 countries, mostly Small Island Developing States, are expected to deposit their instruments of ratification immediately after signing the agreement. The signature ceremony is a legal formality, with only Heads of State or Government, foreign ministers, or other representatives with “formal powers” from their governments signing the agreement.
In the agreement, all countries agreed to work to limit global temperature rise to well below 2 degrees Celsius, and to strive for 1.5 degrees Celsius. The signing ceremony coincided with the International Mother Earth Day and in his message on the day, Ban said the Paris accord, in conjunction with the Agenda for Sustainable Development, holds the power to transform the world.
There is only one original copy of the agreement — it contains the full text of the agreement in the six official languages of the United Nations — Arabic, Chinese, English, French, Russian and Spanish.

There is a page for each of the 197 Parties to the UN Framework Convention on Climate Change. Each nation signed the agreement while seated at a table on a specially constructed stage in the UNGA hall. French President Francois Hollande began the signing ceremony.
“Most people who looked at the global situation say that if we don’t succeed in maintaining the world under a 2 degrees Celsius rise, then it’s going to be incredibly difficult to realise the Sustainable Development Goals,” Nabarro warned.
“And so implementing the Paris agreement is important for promoting prosperity, improving people’s well being and protecting the environment. The Paris Agreement was adopted by all 196 Parties to the UN Framework Convention on Climate Change at the UN Climate Change Conference in Paris on December 12 last year.