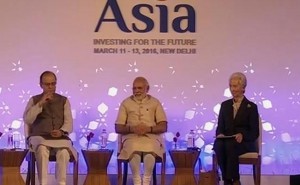 NEW DELHI: India has dispelled the myth that democracy and rapid economic growth cannot co-exist, Prime Minister Narendra Modi said today while addressing the ‘Advancing Asia’ conference in New Delhi.
Speaking at the three-day conference, he also said that “India has shown that a large and diverse country can be managed in a way that can promote economic growth and maintain social stability.”

The conference has been organized by the government of India and the International Monetary Fund.IMF Managing Director Christine Lagarde, who was also a keynote speaker at the conference, had earlier said that “with the promise of more reforms, India’s stars are shining bright.”
Finance Minister Arun Jaitley is expected to address the conference that is also being attended by RBI Governor Raghuram Rajan and Gates Foundation’s Melinda Gates.