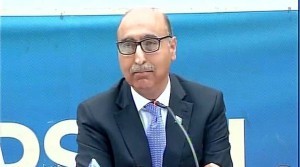 NEW DELHI: Introducing a fresh chill in Indo-Pak ties, Pakistan on Thursday said the bilateral peace process stands “suspended”, indicating that it would not allow Indian investigators to travel there and accused India of creating unrest in its territory.
Pakistan High Commissioner Abdul Basit did some plain-speaking at a media interaction when he said presently the peace process was “suspended”, something India has been reluctant to admit.
He poured cold water on India’s expectations that a team of NIA investigators would be allowed to visit Pakistan in connection with the Pathankot terror strike probe on the basis of reciprocity, a Pakistani Joint Investigation Team (JIT) having just concluded a visit to India.
Pakistan High Commissioner Abdul Basit’s announcement that the peace process with India had been suspended could well torpedo the bold initiative taken by Prime Minister Narendra Modi to build bridges with Islamabad in December 2015.

By paying an unscheduled visit to Lahore, Mr. Modi had reached out to his Pakistani counterpart Nawaz Sharif and despite the Pathankot terrorist attack a Joint Investigation Team (JIT) had managed to visit India.
Given the personal investment by Mr. Modi and the close contacts between the two National Security Advisers, there’s little doubt that Thursday’s comments are a setback to the bilateral peace process.
Mr. Basit’s announcement, which comes close on the heels of the JIT visit to India, also puts a question mark on any future cooperation between the two countries on bringing to book the perpetrators of the Pathankot attack.
As per bilateral practice, Pakistan’s action is apiece with what India did in August 2014 when it unilaterally cancelled peace talks over Mr. Basit’s meeting with separatist Kashmiri leaders.
However, Mr. Basit’s statement that the dialogue had been suspended is at odds with a comment made by the Pakistani Foreign Ministry spokesman on Thursday that both countries remained in “contact with each other” and modalities for Foreign Secretary-level talks were being worked out.

A South Block official in New Delhi, however, said on background that it looked as if talks might not take place given the current state of relations between the two countries.

Islamabad, the official said, was making a big deal out of the arrest of an alleged Indian intelligence agent, Kulbhushan Yadav, and that was borne out by Mr. Basit’s comments too.

For some time now, Islamabad has been the one calling for dialogue with India but it appears evident that they plan to use Mr. Yadav’s “arrest” as a major plank in claiming that New Delhi was fomenting terror in Pakistan.
With a major upswing in relations with the United States, the Pakistani establishment has come to believe that they can raise the ante against India — not just by using Mr. Yadav’s arrest but also by making dramatic statements that the peace process with India had been suspended.
It is also no secret that Pakistani Army chief Raheel Sharif continues to steer Islamabad’s India policy and that Mr. Sharif has to remain in step with the powerful military boss when it comes to dealing with Delhi.
At a time when the ruling Bharatiya Janata Party’s own constituency has been unhappy about continuing talks with Pakistan, Mr. Basit has just made it easier for those against dialogue with Islamabad to say — we told you so.