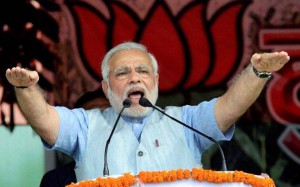 JAMMU: Prime Minister Narendra Modi has said, India will rule the 21st century which is the era of knowledge. He said, with 80 crore youths below the age of 35 years, the dream of every young person can become a progress story of this country.
Mr Modi asked students to get to the position where they could make the best use of the wealth of knowledge to serve the nation and humanity.
Addressing the 5th Convocation of Shri Mata Vaishno Devi University at Katra in Jammu today, he impressed upon the students to set their goal, and strive to achieve that.

Citing the examples of former president – the Missile Man Dr A P J Abdul Kalam, and the mountain man – Manjhi, Prime Minister said that the success does not always come through resources but strong determination and hard work also lead to miracles.
Speaking on the occasion Chief Minister Mrs. Mahbooba Mufti assured that state Government is committed to address the issues of non local students in Jammu and Kashmir.

Meanwhile, addressing a public rally at Kakryal in Katra near Jammu, Prime Minister Narendra Modi said we all have to work together for the development of India and this development has to be quick paced and all inclusive.

Mr. Modi said that BJP led NDA government at the centre is committed for overall development of Jammu and Kashmir. Mr.Modi also said that BJP led government in Centre is marching ahead on its agenda of taking all along for the development of all. Mr. Modi said that with the improved rail and road connectivity a new era of development is going to start in Jammu and Kashmir.
Earlier this morning Prime Minister inaugurated Shri Mata Vaishno Devi Narayana Super Speciality Hospital at Kakryal Katra, the base camp of shri Mata Vaishno Cave Shrine in Jammu and Kashmir. The hospital has been recently constructed at a cost of Rs 300 crore.
The Prime Minister inspected various facilities being provided by the hospital. He said a unique feature of this hospital is that this is being funded by millions of poor people who come to pay obeisance to the shrine