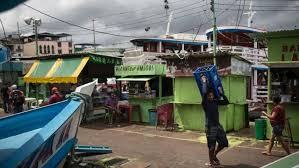 SALVADOR: The goals came in volume for Cristiano Ronaldo this year, as he stretched nets in towns across Europe at a stunning rate. While playing for Real Madrid, Ronaldo scored 51 times in 47 games, earning him the Ballon d’Or for best player in the world.
But for Portugal, he has not been nearly as prolific. In two previous World Cups, the magnetic and polarizing Ronaldo managed only two goals in 11 games, leaving fans of his home country wondering when he would replicate his club success at the World Cup the way, for instance, Thomas Muller does.
Muller has certainly been good for his club, Bayern Munich. But at the World Cup, he excels the way Ronaldo never has, scoring five goals in 2010.
Now he has eight.Once again Ronaldo was left wanting in a World Cup match, and Muller scored a hat trick to lead Germany to a convincing 4-0 victory Monday that left short-handed Portugal in shambles.”This is a moment where we will see who we are,” Portugal coach Paulo Bento said.
Pepe, Portugal’s central defender with a reputation for unsavory play, was sent off in the 37th minute for an ill-tempered head butt on Muller. It came moments after the two had clashed for a ball, and it left Portugal with 10 men for nearly an hour.
Pepe will not be available to play against the U.S. when the teams meet Sunday in Manaus. Portugal could also be without Fabio Coentrao, its all-important left back, who broke down with a groin injury in the 65th minute and left the game, unable to walk to the bench without support from a trainer.
“The assessments right now are not very encouraging,” Bento said.Worse still, center forward Hugo Almeido left the game with a leg injury after a severe tackle in the 28th minute, and his status is also in doubt.Even though it was clear that Pepe had made some contact with Muller, Bento felt the red card, and an earlier penalty, were “forced” by the referee, Milorad Mazic.
Pepe and Muller both went for a ball, and Pepe’s hand glanced off Muller’s face. Based on Muller’s reaction, it was a staggering blow, and he fell to the grass in perhaps staged agony.Pepe, not amused by what he felt was a case of cheesy acting, went to Muller as  he sat on the turf, bent down with his head close to Muller’s and, with a short burst, head-butted him.
“His hand was stuck in my face, and I fell on the floor,” Muller said. “He came back, putting his head toward my head. I can’t recall exactly what happened after that.”Even before Pepe was sent off, Portugal and Ronaldo had little to offer against Germany, which led, 3-0, at halftime with two goals from Muller and one from a Mats Hummels header.
Muller scored his third goal in the 78th minute when he rifled home a rebound off the mitts of Portugal goalkeeper Rui Patricio. No sooner had the ball gone across the line than Ronaldo turned to the fourth official on the sideline and started berating him for a call that Mazic failed to make a few moments earlier, as if that would have mattered.
Ronaldo complained that when his teammate Eder collided with the German defender Benedikt HOwedes, it should have been a penalty kick.