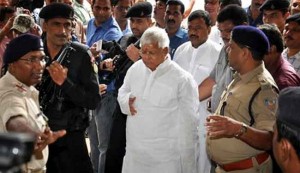 NEW DELHI : Former Bihar chief minister Lalu Prasad, who was awarded a jail term in a fodder scam case, said he still wants to be the prime minister. The Rashtriya Janata Dal chief said, “I also want to be the prime minister. My dream is yet not shattered. I will ally with the Congress to stop the communal forces. My aim is to stop Narendra Modi and Arvind Kejriwal at any cost.”
In an interview to media, Lalu said that his party will have an alliance with the Congress and Lok Janshakti Party in the upcoming Lok Sabha elections. He said, “We will have an alliance with the Congress party, just wait and watch. The aim is to save India from communal forces. I have no issues with LJP chief Ram Vilas Paswan and the Congress. ”The RJD was a key ally of the Congress-led UPA government during its first term from 2004 to 2009 and is now providing outside support during its second term.
On the question of being a part of the Third Front, where regional parties are forming an alliance, Lalu denied being a part of the alliance. He said, “I cannot be a part of the Third Front. Every member of the Third Front wants to be the prime minister.”The Lok Sabha polls will be a battle between Congress, BJP, AAP and regional parties.
Lalu, however, refused to blame the Congress-led government for his conviction in the fodder scam. “I didn’t go to jail because of Rahul Gandhi. It is wrong to blame him,” he said, referring to the Congress Vice President who tore up an ordinance being pushed by the government to reverse a Supreme Court ruling which ordered immediate disqualification of convicted MPs. His action – at a press conference – was seen as a major embarrassment for the UPA government which immediately dropped its plan.

Lalu denied that the ordinance was a move to protect him. “There was no attempt to save me by bringing an ordinance. That’s just a farce. Don’t tarnish the image of UPA government,” he said. The 66-year-old was disqualified as an MP after his conviction in the fodder scam.