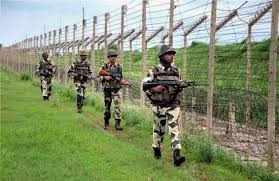 NEW DELHI: To check infiltration bids, nearly 2,000 additional Border Security Force (BSF) personnel and special surveillance equipment have been deployed along the international border in Jammu region for effective domination of the areas.
The additional man-power, surveillance equipment,vehicles and other infrastructure support have been moved into the border along Pakistan to strengthen intelligence network, coordination with sister agencies and conduct special operations along the border.
Home Ministry officials said vulnerability mapping of the Border Out Posts (BOPs), which are sensitive with regard to infiltration, have been carried out and the additional resources have been deployed there. Continuous efforts are being made to deploy the latest surveillance equipment, fully fitted with day and night vision devices, for further enhancing the border domination, the officials said.
The Home Ministry has also directed for effective domination of the border by carrying out round-the-clock surveillance of the borders through patrolling, border ambushes and by deploying observation posts all along the international border. The riverine segments of international border being patrolled and dominated with the help of water crafts and speed boats of BSF’s water wings, the officials said. Security forces have killed five infiltrators and apprehended 13 others in Jammu and Kashmir this year so far. In 2013, 39 infiltrators were killed and 16 others were apprehended in the state. A total of 16 infiltrators were killed and nine others were apprehended in Jammu and Kashmir in 2012.