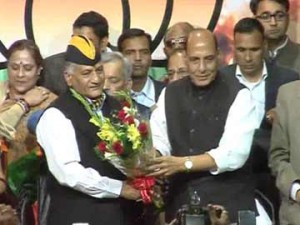 NEW DELHI : Former Army Chief General VK Singh, who was engaged in a bitter battle with the government over his age, joined the Bharatiya Janata Party (BJP) today.Before going to the party’s office in the capital, where he was welcomed by party chief Rajnath Singh, General (Retd) Singh visited the Amar Jawan Jyoti memorial at the India Gate and told reporters that he was joining the party to continue serving the country.
“All the people from the Army think about the nation only. I am going to continue to serve my country. I am joining a party which is nationalist and decisive and can take the country forward,” he said. When asked if he would contest the Lok sabha polls, he added, “I don’t know. The party will decide.”Last year, General (Retd) Singh shared the dais with BJP’s prime ministerial candidate Narendra Modi at a rally in Haryana that was attended mostly by ex-servicemen. However, he had later ruled out joining the BJP, saying he was firmly behind veteran activist Anna Hazare in his crusade against corruption.
General Singh retired in May 2012, after a series of public run-ins with the government. One of them was his decision to sue the government for refusing to accept that his age was wrongly reflected in army records. If he had won, he would have been eligible for another year in office. He dropped his case in January 2013 after Supreme Court judges indicated he was likely to lose.