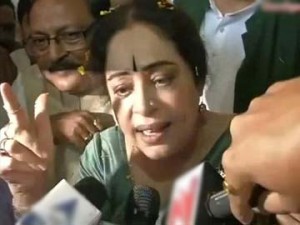 CHANDIGRAH: As actor Kirron Kher arrived in Chandigarh today to begin campaigning as the BJP’s candidate, protesters waved black flags and shouted slogans to signal their disapproval. Her husband Anupam Kher had to dodge eggs.The protests were not sponsored by her rivals, model and actor Gul Panag of the Aam Aadmi Party or Congressman and sitting MP, Pawan Kumar Bansal. These were members of the BJP, who are disgruntled that the party chose to field Ms Kher, who arrived at the party headquarters to slogans of, “Kirron Kher go back”.
Local leaders like Chandigarh BJP president Sanjay Tandon, former MP Satya Pal Jain and former Union Minister Harmohan Dhawan were keen on being fielded and they are cut up at Ms Kher’s nomination. The protesters were mostly supporters of Mr Dhawan.Ms Kher, 58, immediately sought to dispel notions that she is an “outsider” parachuting in days before the elections. “I am the daughter of Chandigarh, it’s my hometown. I will persuade all those who are protesting,” and added, “If Bansal says I am an outsider, ask him why didn’t he take good care of Chandigarh.”
Anupam Kher said his wife, who makes her electoral debut, “will give a good fight. She is a Punjabi kudi (lass) and has done a lot of work for the party.” Four BJP workers have been rounded up by cops for allegedly throwing eggs at the actor.Ms Kher was named by the BJP to contest from Chandigarh only a couple of days after the AAP announced it was fielding the 35-year-old Gul Panag, who, like Ms Kher, possesses a deeply dimpled smile. Social media is replete with quips on how the lack of that attribute puts the Congress candidate Mr Bansal, who has won this seat four times, at a disadvantage.
What has the sitting MP on the back foot, is the shadow of controversy. He had to resign as Railways Minister last year after his nephew Vijay Singla was accused in the Rs. 10 crore cash-for-post bribery scam in his ministry.
Mr Bansal was not named in the CBI’s chargesheet, but eyebrows have been raised at the Congress’ decision to renominate him.