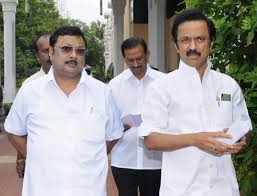 CHENNAI : The latest episode of the family feud in the DMK was scripted today by MK Stalin who returned his older brother’s fire by declaring, “All those who are born have to die one day.”
Mr Stalin’s death “within the next three months” was allegedly forecast by his older brother, MK Alagiri, in a conversation with their father and DMK chief M Karunanidhi.
Yesterday, the 89-year-old party president disclosed that while petitioning against his brother’s primary role in the DMK, “Alagiri had complained against Stalin using harsh language. He even said Stalin would die in a few months.”
“How can a father tolerate this?” Mr Karunanidhi said.
His narration of what transpired with Mr Alagiri was to justify his decision last week to suspend his older son from the DMk for indiscipline.
Mr Stalin today made it clear that he will not work against his brother, warning DMK workers that “Alagiri’s effigies should not be burnt.”