NEW DELHI : Under pressure from UGC to act on its directive, the Delhi University today scrapped its controversial four-year undergraduate programme and reverted to the previous three-year structure.In a statement today, Delhi University Vice Chancellor Dinesh Singh announced that the four-year progamme would be rolled back and students would be admitted under the old three-year format in place till two years ago.
“The University of Delhi recognises the need of the hour. It is of paramount importance to protect the students by ensuring the start of the admission process,” Mr Singh said.For days, the university had held out against repeated orders to cancel the unpopular four-year programme it introduced last year despite objections.
The standoff forced around 60 colleges in Delhi to put admissions on hold. Nearly three lakh students have applied for admission to some 54,000 college seats.
After many unheeded directives, the University Grants Commission or UGC – the central funding agency that coordinates college education policies – told the university last night that its order was “clear and unambiguous”, the four-year course was a violation of the National Education Policy.
The Vice Chancellor’s statement made it clear that he has not quit his post. Reports of his resignation on Tuesday had been followed by a denial from his aides hours later. Mr Singh has not clarified till now.In a statement, DU Vice Chancellor Dinesh Singh asked principals of various colleges affiliated to the varsity to start admissions for the new session.
“In line with the directive of the UGC, the University has decided to roll back the FYUP. Consequently, the admission process shall be conducted under the scheme of courses that were in force in the academic session 2012-13 in all the colleges of the University of Delhi,” Singh said.
The decision puts an end to the uncertainty over the admission process for 2014-15 which was triggered due to the stand-off between DU and UGC over FYUP.Over 2.7 lakh students have applied for admission to more than 54,000 seats in 64 colleges of the varsity.
The admissions were to begin on June 24 but have been delayed due to the stalemate.Singh said DU recognises the need of the hour and it is of “paramount importance” to protect the interests of the students by ensuring the start of the admission process. 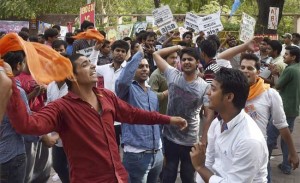 “It is expected that the principals of our colleges shall assist in devising and ensuring a speedy completion of the admission process,” he said.