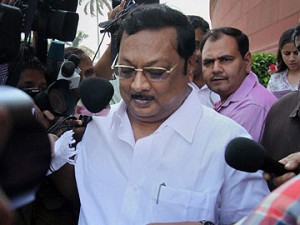 CHENNAI : : MK Alagiri will not run from his constituency in Tamil Nadu as a candidate of the DMK, the party headed by his father, M Karunanidhi. In January, Mr Alagiri, who is 63, was suspended for a sustained campaign to undermine his younger brother, MK Stalin, who has been picked by his father as his political heir.
“Don’t hurt me by asking about Alagiri,” said Mr Karunanidhi to reporters as he announced the regional party’s candidates. Mr Alagiri’s constituency has of Madurai has been reassigned to another DMK member.
Included in the DMK’s list of candidates are two former Union ministers being investigated for corruption when they handled the telecom portfolio. A Raja and Dayanidhi Maran will both run for Parliament from the constituencies they won in the last election in 2009.Mr Maran is being investigated by the CBI for allegedly misusing his office as Telecom Minister to pressure the sale of Aircel to a Malaysian firm whose owner then made a large investment in Sun Networks, owned by Mr Maran’s brother
Mr Raja replaced Mr Maran as Telecom Minister and is accused of accepting large bribes to help ineligible firms get mobile network licenses at throwaway prices in 2008.Mr Karunanidhi also announced a candidate for Sivaganga, represented in Parliament by Finance Minister P Chidambaram. The move signals that the DMK is not considering an alliance with Mr Chidambaram’s party, the Congress, which is asking voters for a third consecutive term in power at the Centre, but is expected to perform poorly according to opinion polls.
The DMK participated in the Congress-led UPA coalition at the Centre till March 2013, when it quit the government, saying India had failed to take a strong stand against the Sri Lankan government for alleged atrocities against the country’s ethnic Tamils.