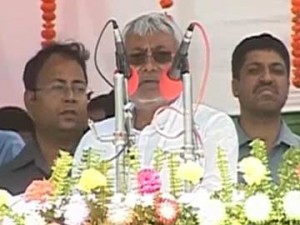 NAWADA: Political arch rivals Nitish Kumar and Narendra Modi today campaigned in the same Lok Sabha constituency of Nawada in Bihar, within 25 minutes and two hours of each other.At Nardiganj, 30 kms out of Nawada town, Nitish Kumar targeted both Mr Modi and Rahul Gandhi, who held a rally in his state yesterday.
“It seems like (Congress leader) Jairam Ramesh is not tutoring Rahul Gandhi properly. He has been saying factually incorrect things in his rallies in Bihar,” said the Bihar Chief Minister.But he reserved sharper comments for Mr Modi, the BJP’s prime ministerial candidate.
“…you have this person. You switch on the TV. You switch on the radio. Only one person. Till yesterday, they were not tired of praising Bihar’s development. Now they talk about Gujarat’s development. But what development has happened in Gujarat? What heaven has descended on Gujarat? Look at what happened in 2002. A person who divides the country can’t rule,” he said.
Mr Kumar has often alleged that Mr Modi is a divisive leader whose record as the man in charge when communal riots tore through Gujarat in 2002 cannot be overlooked.Around two hours later, it was Mr Modi’s turn.
He flew in at 3:15 in the afternoon, to a local crowd that the police estimated came to 50,000. This, said cops, was far more than the turnout at Nitish Kumar’s rally. Mr Kumar’s Janata Dal-United, however, pointed out that Nitish addresses three-four rallies every day in Bihar while Mr Modi’s rallies are few and far between.
Mr Modi stressed more on targeting the Centre, as he raked up animal slaughter, calling it “pink revolution.” He said, “Animals are being slaughtered and being taken to Bangladesh. The government in Delhi is giving subsidies to those who are carrying out slaughter. ” His pot-shots at Nitish Kumar were fewer today.
The two chief ministers have been locked in a vicious political feud ever since Mr Kumar ended a 17-year alliance with the BJP in June last year over its decision to centre-stage Mr Modi as its prime ministerial candidate.