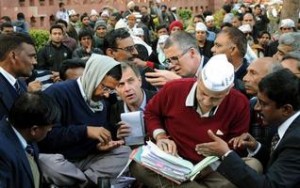 NEW DELHI : It is raining heavily near Rail Bhawan, where Delhi chief minster Arvind Kejriwal and his Aam Aadmi Party are continuing their protest against the city’s police on Day 2. Mr Kejriwal slept on the road last night. Arvind Kejriwal and his supporters have made it clear that the bitter January cold or unexpected rain will not affect their protest. To make the point, AAP workers danced and sang and shouted slogans in the rain under posters, plastic sheets and other makeshift umbrellas this morning. Mr Kejriwal, who is said to be unwell, sat in his car. Minister Rakhi Birla, 26, refused to take shelter, saying, “Rain in January is propitious. We will be here till we get justice.” On Tuesday morning, Arvind Kejriwal refused to negotiate with the Delhi Police and shift his protest to Jantar Mantar, vowing to flood the streets with protesters on Republic Day. “Delhi’s Chief Minister will decide where to sit, not the Home Minister,” he declared.) Mr Kejriwal has singled out Home Minister Sushil Kumar Shinde for attack. “How can Shinde sleep when so many crimes are happening in Delhi?” Mr Kejriwal asked at the crack of dawn. Later he said, “Is he a dictator? We won’t negotiate, this is not a grocery store.”) He has asked people to come out and join his protest. “What republic and what democracy? I want to appeal to people to come out in large numbers,” the CM said. The Chief Minister’s protest has shut down four metro stations in the centre of the city. Most roads near the President’s House, Rashtrapati Bhavan, have been barricaded. A triple ring of security that includes barricades, traffic and other cops and paramilitary forces has been thrown around the protest venue. The protest presents a security nightmare for the policemen which has to sanitise and secure the area for Republic Day. The milling crowds at the protest site created chaos for traffic on Monday at rush hour in central Delhi, causing much inconvenience for the aam aadmi or common man Mr Kejriwal claims to represent.
Arvind Kejriwal defied prohibitory orders yesterday to launch his protest against the city’s police, announcing, “I am an anarchist. I will create anarchy for Mr Shinde.” He was stopped f rom going to the home ministry, where he had planned to protest originally. 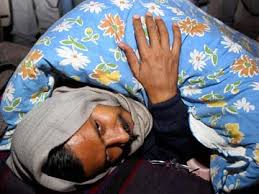 The Chief Minister has accused the Centre of denying the protestors basic amenities. “Since yesterday no food or water has been allowed to enter the protest site. What message does the central government wants to convey? Many people want to come but they are stopped through barricades. Police is carrying people selectively in to the bus and beating them up. Is this called democracy?” he asked.
Home Minister Sushil Kumar Shinde has asked Mr Kejriwal to wait for an inquiry to be completed for any action against three Delhi Police cops the AAP wants suspended. The Chief Minister has accused the cops of dereliction of duty, for not following the orders of his ministers.