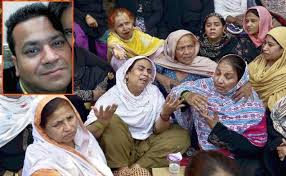 NEW DELHI:  Police on Tuesday arrested three more people, accused of beating to death a 38-year-old motorcyclist over yielding space to their car during a traffic jam in the capital. Another accused had been arrested on Monday, while the fifth accused is on the run.
Atif Lala, 26, and Shahdab, 24, were arrested from different places in the city earlier in the day, while Salimuddin alias Salim was arrested on Tuesday evening, police said.
“Shahdab is the son of Amin Pehalwan, who is also an accused in the case and is still absconding,” said a police officer.Mohammed Wasim was the first accused to be arrested on Monday. All the arrested people are residents of Turkman Gate area.
The car involved in the incident was also seized on Tuesday, police said.
Meanwhile, the family members of the victim wrote to Delhi Police Commissioner B.S. Bassi requesting him to take action against the policemen who did not come forward to help at the time of the incident.
A spat over yielding space in a traffic jam ended fatally for Shahnawaz, a resident of Mata Sundari Road, when his motorbike was hit by a car near Turkman Gate in Daryaganj around 11.30 p.m. on Sunday while he was returning home from a family function with his two sons.
Shahnawaz owned an electrical shop on Mata Sundari Road, while his parents lived near Turkman Gate in the old quarter of Delhi.The family alleged that the sons of Shahnawaz — Fahad (13) and Kaif (9) — pleaded with two policemen posted at a nearby police post at the time to help but to no avail.