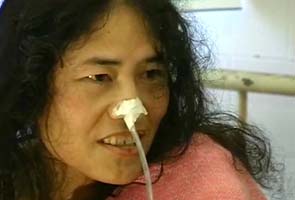 NEW DELHI: A Delhi court on Thursday issued a production warrant for March 29 against rights activist Irom Sharmila after she did not appear before it in a case lodged against her for allegedly attempting suicide during her fast-unto-death in New Delhi in 2006.
The Manipuri activist, on a fast for over 12 years demanding repeal of the controversial Armed Forces (Special Powers) Act (AFSPA) in her home state, failed to turn up before the court on Thursday despite its direction on December 19 last year.
Metropolitan Magistrate Akash Jain issued the production warrant and the matter is fixed for recording of statement of prosecution witnesses in the case. On March 4 last year, the court had put 40-year-old Sharmila on trial after she had refused to plead guilty for the offence of attempting to commit suicide (section 309 IPC). If convicted, Sharmila, who is out on bail in this case, faces a maximum jail term of one year.
Popularly known as the ‘Iron Lady’, Sharmila, who has been on fast since 2000 and is fed through a nasal tube, had earlier told the court that her protest was non-violent. She had also rejected the charge that she had attempted suicide in 2006.
While framing charges against her, the court had said, “It is alleged against you (Sharmila)…that you on October 4, 2006 at about 8 PM sat at Jantar Mantar on a fast unto death uptil 11.30 PM on October 6, 2006 and refused to get your medical check up done and thereby, committed an act with an intention or knowledge that under such circumstances death may be caused and thereby, committed an offence under Section 309 of IPC.
Her counsel had earlier told the court that Sharmila has already spent one year in judicial custody which is the maximum sentence for the offence under section 309 of IPC.