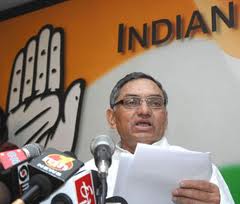 NEW DELHI : In a statement which could raise a few eyebrows, senior Congress leader Janardan Dwivedi said on Sunday that it would have been better if the party had sat in opposition in 2009 and not formed a second successive coalition government after 2004.
In an interview to a TV channel, Dwivedi said, “It would have been better that after getting more support from the people than in 2004, the Congress should have called it quits in 2009.” He added that someone else could have formed the government and that the Congress could have played the role of a healthy opposition.
Expressing regret, Dwivedi said that “perhaps no major political party now had the patience as well as the self-confidence to discharge the role of an Opposition readily.” He said that no party was ready to face challenges and then come back with a new mandate to form the government.

At the same time the Congress leader maintained that instead of developing ‘natural leadership’, importance was being given to promoting ‘technical leadership’.

Talking about the rise of regional leaders in the last 20-30 years, Dwivedi said that though they did not speak fluent English or were educated abroad, and were not experts of new technology, they still they got the support of people. He was of the view that their only limitation was that they lacked a national perspective. “However, they had the power to damage the major parties having national outlook,” he said.
Lamenting the fact that that the Congress had failed to come back to power in many states where it had once ruled, the Congress leader said that candidate selection was one of the problems but the bigger problem was that the party did not try to create new leadership keeping in mind the entire society.
In his advice to the Congress, he said that it should focus on long-term building of the party and not practice alliance politics.