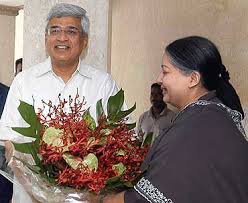 CHENNAI : Tamil Nadu Chief Minister J Jayalalithaa, watched as a key player in the general elections due by May, announced an alliance yesterday with the Communist Party of India or CPI in her state. It is being seen as part of a possible regrouping of a non-Congress, non-BJP Third Front.
At the Chief Minister’s Poes Garden residence in Chennai yesterday, CPI veteran AB Bardhan said, “If the alliance succeeds, prospects are open to her,” when asked if the alliance would project Ms Jayalalithaa as its candidate for Prime Minister. Ms Jayalalithaa, who heads the AIADMK, said, “PM issue will come later. Our aim is to work together.”
Today, she will meet the CPM’s Prakash Karat. The Left parties had fought the last assembly elections in Tamil Nadu with the AIADMK.
The Left and the AIADMK had participated in a conclave at a Delhi stadium last September, where 13 parties came together as an “anti-communal” front and flayed the Congress and the BJP. Leaders like Mulayam Singh Yadav of the Samajwadi Party and Nitish Kumar of the Janata Dal (United) held hands on stage in a show of strength, with talk of a federal front in the air.
Ms Jayalalithaa did not attend that meet, but sent a senior party representative. It was seen as a tactical move by the canny politician, who is seen as a friend of Narendra Modi, the BJP’s prime ministerial candidate.
The BJP has worked hard  in the last few years to woo Ms Jayalalithaa as a possible alliance partner should it come within striking distance of forming a government at the Centre in this year’s election. She has been an ally in the BJP-led National Democratic Alliance or NDA before.
But the 65-year-old Ms Jayalalithaa is said to have prime ministerial ambitions of her own, not unlike Mulayam Singh Yadav and Mayawati of the BSP, both regional powerhouses too. Recently Mamata Banerjee, Chief Minister of West Bengal, indicated that she might not be averse to such a promotion either.