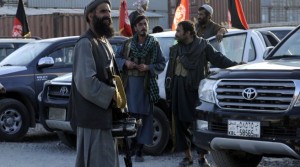 KABUL : A two-month campaign started Sunday for the upcoming presidential election slated for April 5 in Afghanistan, where security remains a major challenge
“The presidential candidates’ political campaign officially started Sunday and will close April 2 or 48 hours before the election day,” an official of the Afghan Election Commission told reporter
Afghanistan’s third presidential and provincial councils polls are slated for April. So far, eleven candidates have registered their names to contest for the presidental post
On Saturday, two workers of a presidential candidate, Abdullah Abdullah, were killed in an attack in Herat city.
The victims were members of Abdullah-led National Coalition Party and the attack appeared to be the second incident of pre-election violence in the country.On Jan 24, Mohammad Ismahil Khan, who registered for the vice presidential election, survived a suicide bombing, also in Herat city.
The provincial candidates’ electoral campaign will begin March 4 and end April 2, according to the electoral timeline, the official said.
The Election Commission has called on political organisations and parties to follow the rules.Based on the election laws, the candidate must not spend more than 10 million afghani ($175,400) during the two-month campaign.