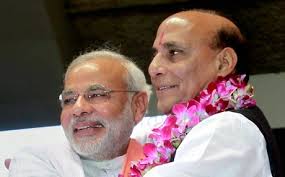 NEW DELHI : The BJP on Friday charged the Congress with trying every trick, including invoking the threat to secularism and tying up with any force, to keep the main opposition from coming to power after seeing the “writing on the wall that its defeat is certain” in Lok Sabha polls.
Speaking at the BJP National Executive in New Delhi, party president Rajnath Singh said there is growing antagonism against the Congress mainly due to “malgovernance, indecisiveness and corruption” in the UPA government.
“Congress can see the writing on the wall and knows that defeat is writ large there. Congress is losing the elections and hence is trying to ensure that BJP does not get a clear majority. It is making every effort to stop the BJP’s march to success,” BJP spokesperson Prakash Javadekar told reporters, quoting Mr. Singh.
The BJP Chief said since Congress is aware it is going to lose the polls, it is now trying every trick in the book to ensure that a “majboor (weak)” government is formed at the Centre.
Though Mr. Singh did not name Aam Admi Party, whose growing clout is a matter of concern for the BJP, party sources said he was making a veiled reference to it. Congress is supporting the AAP government in Delhi and BJP has often alleged that the latter is the B-team of the former.

BJP is also concerned about Congress encouraging the non-UPA, non-NDA parties to keep the saffron party from forming a government in case of a hung Parliament.
Mr. Rajnath Singh also referred to the issue of secularism, a matter on which Congress has targeted it often, and said many forces want India to be a weak state.“The party president gave the assurance that BJP-led NDA will form a government which will not only be strong on economics and ethics but will also never compromise on the issue of nationalism,” Javadekar said.
Mr. Singh described UPA government as an NPA-non-performing asset — and said it is time to “write it off”.“He said India attained Swarajya (independence) in 1947 but now it is time for Purna Swarajya (full independence) by making the country free of corruption and unemployment,” Mr. Javadekar said.